By Chris Brown on March 16, 2017 in Cranes and davits, Heesen Yachts

A 1987 121’ Heesen Yacht was recently hauled at Lauderdale Marine Center and both High Seas Yacht Service and High Seas Hydraulics were called upon to bring some life back into this old girl. After 30 years of cruising the oceans, she was in need of some major overhauls on a number of her systems.

One was to remove a couple of old deck cranes from her upper deck which had long since stopped working. Typically when we remove deck cranes for refurbishing, we carefully dismantle the various components to diagnosis the problem and once corrected reinstall the units back in the boat. In this situation, it was deemed that the deck cranes would probably be replaced with new units so we took a more expeditious approach to the removal. 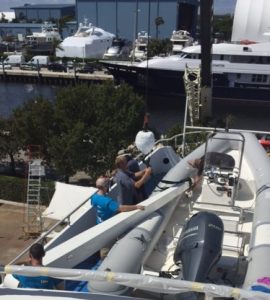 Our hydraulics team, working closely with the Lauderdale Marine Center ship yard crane operator, methodically attached a number of straps to the units to stabilize them as they worked to release the bolts from the plates that secured the deck cranes to the boat. We are fortunate to have an outstanding crane operator – Angel – that is slow and patient.  Constant and clear communications with the ship yard crane operator is crucial to this task and can only come with years of experience working on these types of jobs When you think about the loads these deck cranes are responsible for while hoisting tenders or other equipment more than 30 feet in the air, removing the bolts was no easy task and had to be done with precision to keep the unit from shifting and possibly damaging the yacht.

Once the bolts were close to releasing the crane from the deck, our crew needed to quickly re- 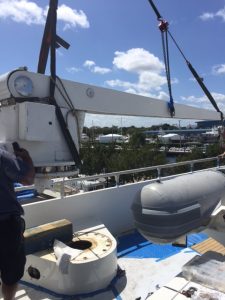 adjust the straps in order to control the unit as it was lifted into the air. Cranes have a very uneven weight distribution and weigh several hundred pounds so without the proper balance applied by the straps and chain come-along, they could twist or slip potentially hitting the deck or the side of the yacht while being lowered to the ground.

This type of work takes a lot of experience, knowledge of the units and patience to do it right and to do it safely for both the crew and the vessel.